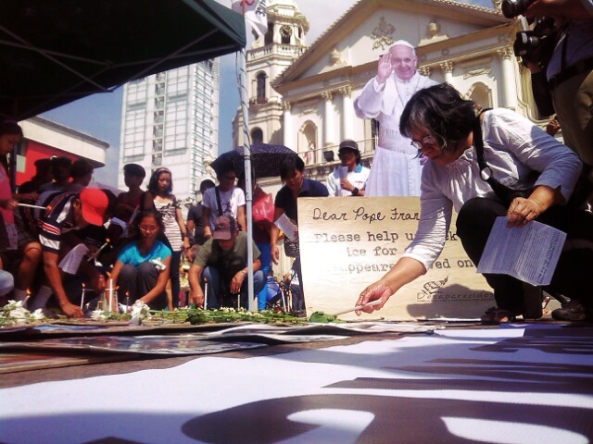 MANILA – “Your Holiness, please intercede for us in seeking justice for our disappeared loved ones,” wrote families of desaparecidos to Pope Francis as they gathered at Plaza Miranda on All Souls Day.

As a renewal of vows to seek justice, they lighted candles and offered flowers to remember those who were forcibly abducted and disappeared by state security forces since martial law up to the present.

“It has been the practice of families and relatives of victims of enforced and involuntary disappearances to gather every November 2. Beyond remembering, we come together as a reminder that our loved ones have yet to be surfaced and the state’s policy of enforced disappearances be stopped,” said Desaparecidos secretary general Aya Santos.

It has become more significant as families of desaparecidos gathered to join the nation in awaiting the visit of Pope Francis to the Philippines in January 2015.

Santos explained they have followed and listened to series of statements Pope Francis on justice and human rights. For the families, his visit is an opportune time to voice out the injustice and rights violations in the Philippines.

“Hope springs when on several occasions he made clear his firm stands to defend human rights and in seeking social justice. We turn to the Pope for support because under the current regime of Noynoy Aquino, human rights violations against the people intensify without let up. We stand as testimonies to the gross situation of human rights here,” Santos said.

Santos said there have been 21 victims of abduction under Pres. Aquino and has since added up to the number of desaparecidos since the Marcos dictatorship.

Despite the passage of the Anti-Enforced Disappearance Law, the crime of enforced disappearance continues as a state policy under Oplan Bayanihan, Aquino’s counter-insurgency program. Also, as a DAP recipient program, it uses public funds to abduct, torture and disappear persons. It also uses funds to coddle the likes of butcher Jovito Palparan who is a ‘free man’ at Fort Bonifacio.

“We pray that the good Pope will listen to our plea and stand one with us in calling to stop enforced disappearances in the Philippines. Dear Pope, please heed our call for justice. We cry out to surface all the disappeared, in the Philippines and other parts of the world, such as in Latin America and Argentina, the Pope’s homeland,” said Santos.

Born Jorge Mario Bergoglio, Pope Francis is from Argentina, a nation that also suffered the worst kind of human rights violations under a dictatorial rule in the 1970s. ### 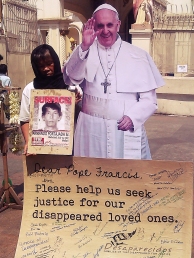 Today is Tatay’s 7th year of disappearance. My father, Leo Velasco, disappeared under the Gloria Arroyo government. On that day, February 19, 2007, Tatay was walking along Pres. Aguinaldo St. in Cagayan de Oro. He stopped to buy a stick of cigarette when a gray Mitsubishi L300 van suddenly stopped and men grabbed him.

I never saw him since then.

I was shattered to find out Tatay was abducted. The first few hours of trying to find Tatay was excruciating. I worried thinking he was being tortured. Days passed and still there was no sign of Tatay. We went to military camps, police headquarters, asked assistance to the Commission on Human Rights, International Committee of the Red Cross and so on. Still, Tatay remain missing.

My parents, being consultants of the National Democratic Front of the Philippines for the peace process knew the risks of fighting for the principles they believed in. Having comrades who were killed, tortured, imprisoned, disappeared, Tatay knew he might end up like them. He had told me about these risks, trying to build up the courage in me. He was aware that someday I might lose him in the same way.

So, every year since that day I write Tatay a letter, hoping it would reach him wherever he is—in some dark detention cell perhaps?

But this year, my letter is addressed to you, Mr. President. For after seven years of disappearance, Tatay is most probably not alive anymore. My logical mind tells me this. But, my hopeful heart says otherwise.

Since day one, I held Gloria Arroyo responsible for the disappearance of my father, and many others. But today, I am holding your government accountable for the continuing disappearance of Tatay and nine other missing NDFP consultants, and hundreds more of desaparecidos.

Your government remains indifferent to victims like us who seek justice. The Anti-Enforced Disappearance Law may be enacted. Yet, none of the perpetrators were actually prosecuted. The notorious rights violator Ret. Gen. Jovito Palparan remains at-large. I doubt if I will ever get justice for my father under your regime.  You have even closed all doors for the continuation of the peace negotiations between the NDFP and your government, a venue for us relatives of missing NDFP consultants to address our concerns. This makes our quest for justice even dimmer.

Today, my only desire is to know what had happened to Tatay, to get his remains, and put him in a proper resting place. I know that even this is too much to ask of you, Mr. President because to surface my father and the other missing persons will reveal a lot of dirty secrets in the military institution. But, you owe us. I’m sure anyone who has humanity would understand the kind of pain we families of desaparecidos are going through.